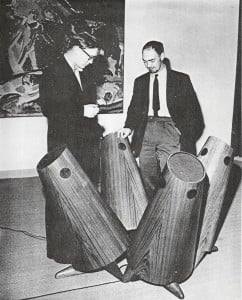 More images of the Coalscuttle

As far back as in 1953 Stig Carlsson designed the peculiar ”Kolboxen” (Coalscuttle) – a cannon look-alike bass reflex object, with built-in tube amplifier, 4 pcs Peerless cone tweeters, MT20HFC, mounted crosswise round the 8 inch midrange unit in the orifice, the broad band driver Philips 9710, and deepest down in the bottom, a Peerless 10 inch bass driver and the tube power amplifier. 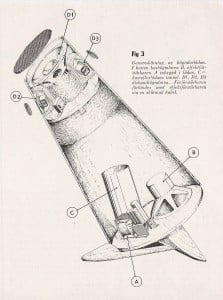 This extremely well sounding speaker looked like nothing else, either in shape, nor in sound reproduction and rapidly became a favourite among audiophiles of that time. ”Kolboxen” made Stig Carlsson one of the big promising names in swedish Hi-Fi, and everyone well-informed curiosly followed his progress. Today ”Kolboxen” with its futuristic cone-form and excellent craft is a coveted jewel almost to view as a precious antique.

Only 250 to 300 pieces of ”Kolboxen” were manufactured as approved of by Stig Carlsson.The first series of 150 pieces was made by Elektron-Lund in Malmö. Manufacturers were Bengt Wilander and Martin Persson. (Martin Persson, MP, during the sixties and seventies beccame a well known designer and maker of loudspeakers). The following series of about 120 speakers were also built in Malmö, now under the brand Audio-Nike. Responsible for the making of these speakers were four persons: Bengt Wilander, Stig Troholst, a docent Hansson, and Leif Pineus, who kindly gave this information to CarlssonPlanet. A carpenter in Tibro made the cabinets to all original ”Kolboxen”. There are however statements about a large-scale pirated manufacturing in the neighbourhood of Jönköping during the same period of time, i.e. late fifties and early sixties. This information is not confirmed by reliable sources.

LISTENING IMPRESSIONS
Restored this speaker must in sound quality be close to the fabulous and subsequent OA6 type 1, since the design in many parts is the same. Then we are talking about very high standards of sound quality. It is said that japanese enthusiasts pay large sums for a pair and that a swedish collector owns twelve of them.

There was a special pre-amplifier produced for the operation of ”Kolboxen”, also known by the name Lund 1001. Specifications would be published later on CarlssonPlanet. 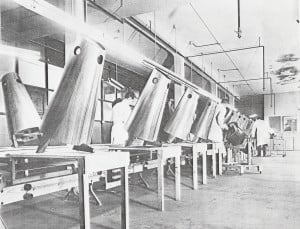 RESTORING & UPGRADING
According to a Carlsson-specialists the weak point of ”Kolboxen” is the enclosed, not ventilated installation of the power amplifier. The tube-amplifiers get very hot and this is devastating mainly for the delicate Peerlees bass-drivers installed quite close at the bottom of the cabinet. In particular the surrounds dries out and cracks and consequently the whole construction starts to let air leak in and both the drivers and the amplifier is at risk to be destroyed by fire.

The solution to this is to move the power amplifier outside of the cabinet and to connect it with cables to the drivers in the cabinet. Today we have no closer information about how this ought to be done, but we will come back on this issue.

According to specialists it is on the whole just to follow the advice in Restoring & Upgrading. 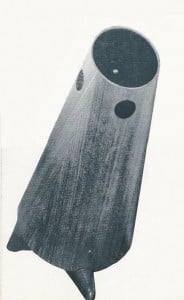 Amplifier:
Push-pull tube amplifier, OTL, Output Transformer Less with two separate channels. One for low frequencies 20 – 300 Hz and one for higher frequencies 300 – 16.000 Hz. 55dB of negative feed-back.
Amplifiers located inside the cabinet.
Output tubes
Two pairs of EL86
Output power
10 – 12 watts per channel (high freq. and low freq.).
Principle
Three way bass reflex. Active bi-amplified speaker with level adjustment for the low frequencies for adjustment to the room.
Woofer
Peerless 10 inch, 800 ohms.
Midrange
Philips 9710AM, 800 ohms
Tweeters
4 Pcs. Peerless MT20HFC driven by a transformer with air gap.
Prices:
New: No info.
Second hand: Very few speakers change hands so indicating a market value is difficult. The technical design is somewhat less developed compared to the more modern OA-6 Mk I. On the other hand the aesthetics and the fact that it is so rare should compensate for this, so in all the prices are probably similar to the OA-6 Mk I.
This would indicate that the price range could start at 4.500 SEK for a pair that is not restored up to perhaps 16.000 SEK for a pair that has been restored and upgraded fully with new tweeters, over-hauled bass- and midrange speaker, new internal wiring and with serviced amplifiers equipped with new tubes. 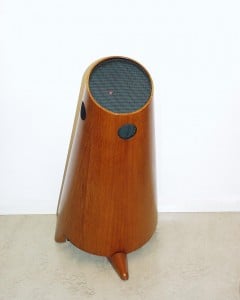 In order to protect your privacy, we do not include the feed here, please click the link to visit the page.